Regular readers of this blog will no doubt be familiar with the All Trials campaign. They are campaigning for greater transparency in clinical trials, and call for all clinical trials to be published. Although in the case of licensed medicine, regulators get to see all the data from clinical trials, All Trials make the point that it's not satisfactory that doctors simply have to take the regulators' word for it that a drug is effective. They should be able to see the data for themselves. All Trials claim, and I think all right-thinking scientists would agree, that transparency is at the heart of the scientific method.

Against this background, I was fascinated to read a recent article in the Guardian. This article claims that Evil Big Pharma are involved in a Grand Evil Conspiracy in which they "mobilise" patient groups to help in their Evil Struggle against transparency.

I can think of only 4 reasons why the article might not have revealed the memo:

Now, I don't know whether there is really a Grand Evil Conspiracy or not. But I do know that I can't reliably conclude there is on the basis of an article that doesn't reveal its data.

But interestingly, looking at the reaction to the article on Twitter, some people seem to be convinced that the allegations in the article are spot on. One of those people is Ben Goldacre, one of the chief architects of the All Trials campaign. Looking at his tweets, it's pretty clear he believes the allegations to be accurate. 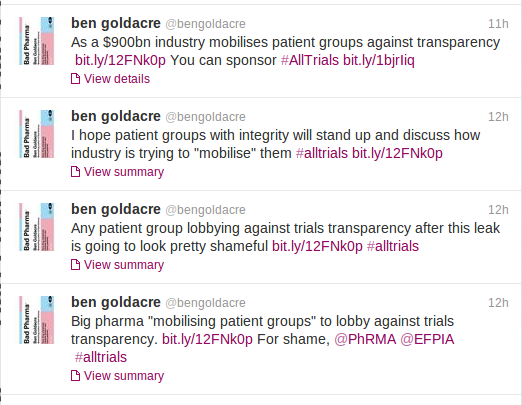 Goldacre has largely become famous by virtue of his incisive critical thinking skills, and certainly understands the importance of transparency and having access to relevant data. So you'd have thought he'd be suspicious of the claims in the article, given that the relevant data are hidden, and demand that more evidence be provided, wouldn't you?

Goldacre starts from a position of being broadly anti-industry. So when an article comes along that is written from an anti-industry perspective, it seems that all those critical thinking skills go straight out of the window.

There's a fascinating article discussing this same topic at eyeforpharma, which seems to cast serious doubt on the accuracy of the Guardian article.

← The Polypill doctors' conflict of interest Complementary and alternative investments →