Do 1 in 3 women really have an abortion?

My attention was recently attracted by an advert for the British Pregnancy Advisory Service in which they claimed that 1 in 3 women will have an abortion. 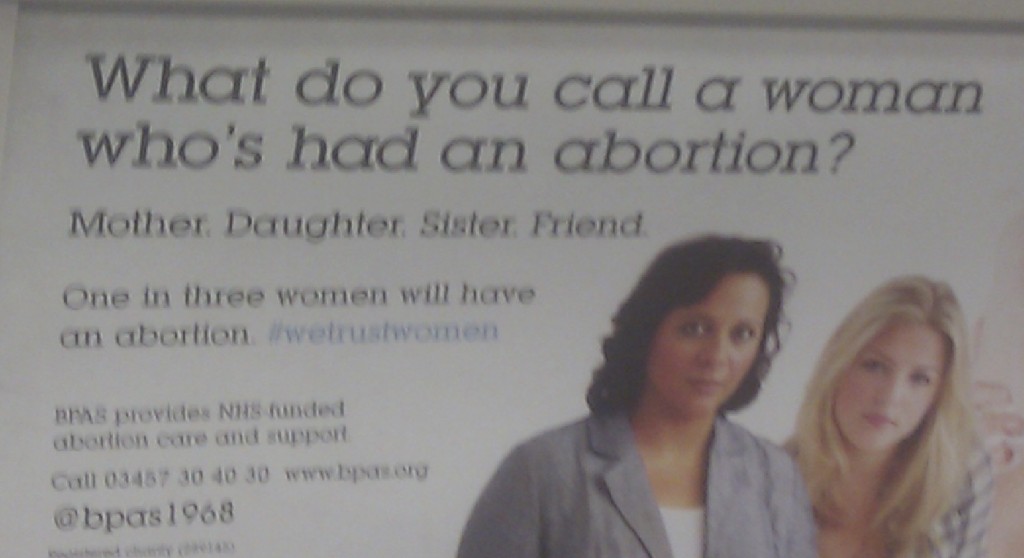 I found that statistic surprising. I asked BPAS on Twitter what the source of that statistic was, and to their credit, they tweeted back with a link to a peer-reviewed publication by Stone and Ingham which did indeed state that 1 in 3 women in Britain will have an abortion in their lifetime.

However, I still have my doubts.

Firstly, however, I should make it clear that I really don't want to have a go at BPAS here. They do incredibly worthwhile and important work. Having to deal with an unwanted pregnancy is really tough, and the support BPAS give to women who are unlucky enough to find themselves in that position is an unquestionably good thing.

But, as with the All Trials campaign, I don't think being on the side of the good guys gives you a free pass to use iffy statistics.

Just because a statistic is stated as a fact in a peer-reviewed journal doesn't mean that it is a fact. It's important to know how the statistic was calculated. So how did Stone and Ingham calculate their statistic?

The worrying thing is that they don't actually say how it was calculated. They refer to data from the Office of National Statistics for abortions in 2009, which found an age-standardised annual rate of 17.5 abortions per 1000 women. The ONS report does not state what the lifetime probability of having an abortion is, and Stone and Ingham do not say how they calculated their estimate of a 35% lifetime risk from the ONS data.

However, I suspect they calculated it as follows. If you multiply 17.5 per 1000 (annual rate) by 30 (a reasonable estimate of the number of reproductive years of most women, and in fact the ONS figures show very low numbers of abortions before age 15 or after age 45), then you get a lifetime risk of having an abortion of 52.5%. However, that doesn't take account of the fact that some women will have more than one abortion. That figure of 52.5% is too high, as it includes double counting for women who have a second abortion, triple counting for those who have a third, etc. According to the ONS figures, 66% of abortions were first-time abortions. If you multiply 52.5% by 66% you end up with 35%, which is the figure Stone and Ingham state is the lifetime risk of abortion.

There is, however, a subtle statistical problem with this.

The ONS data are cross-sectional data. They include abortions in women of all ages. Not surprisingly, they found that older women were more likely to be having a repeat abortion than younger women. The figure of 66% for first time abortions is an average across the age range, and includes women in their teenage years as well as women in their 40s.

However, if we are considering the risk that an individual woman will have an abortion at sometime in her life, then that cross-sectional average for the percentage of abortions that are first time is not relevant. What we need to know is the percentage of women who ever have abortions who only ever have one. The cross-sectional average will overestimate that figure, because it will include young women who are having their first abortion but who will go on to have second abortions in subsequent years. So the true proportion of abortions, over the course of women's lives, which are the only abortion the woman has, will be less than 66%.

We don't know how much less than 66% the lifetime figure is. I'm honestly not sure whether the lifetime risk of having an abortion could be calculated from the ONS data. Ideally, you'd need to collect a longitudinal dataset to answer that question. Possibly with some sophisticated statistical modelling it could also be estimated from the ONS data, but I'm not sure how I'd go about that without putting considerably more thought into it than is reasonable for a short blogpost.

But I'm pretty sure that the claim that 1 in 3 women will have an abortion is not supported by the data, and overestimates the lifetime risk of abortion because it hasn't taken sufficient account of double counting.

None of this, of course, changes the message behind the BPAS advert, which is that women who find themselves with unwanted pregnancies need and deserve help and support, and that BPAS are to be commended for providing it. I'd just be happier if their message were based on more accurate statistics. It's hard to blame BPAS for using the statistic: after all, it was published in a reputable peer-reviewed journal. But I hope they'll take another look at it.