I’ve written before about the magazine “What Doctors Don’t Tell You”, but just to refresh your memory, it is a dreadful pile of nonsense, carrying dangerously misleading health advice. It includes such gems as suggesting vitamin C can cure AIDS or that homeopathy can cure cancer. If you want to know more about just how outrageously irresponsible the magazine is, you might want to visit http://wwddtydty.com or look at Josephine Jones’s impressive list of links.

Now, perhaps none of this would matter very much if it were a subscription magazine where alternative medicine cranks could get their monthly fix of drivel and the rest of us didn’t have to worry about it too much. But I think it does matter when respectable high street retailers stock the magazine. That makes it look like a respectable source of health advice, rather than the crazy conspiracy theory nonsense that it is. If someone walking into a respectable retailer saw this magazine in their “health” section, then they might think it is something to be taken seriously. The consequences of that could be tragic. Beyond Positive have written eloquently about the dangers of persons living with HIV being exposed to such dangerous advice.

Sainsburys briefly stocked the magazine, . Tesco, however, is another matter. They continue to stock the magazine.

Tesco’s response has been something of an eye opener. They have clearly decided on a position on stocking WDDTY, but do not seem able or willing to explain their position. Their position, as set out in the standard template email that their customer service department has been using to respond to anyone contacting them about WDDTY, reads as follows:

I understand you have concerns over the magazine, What Doctors Don’t Tell You, and I can appreciate your views on the matter.

One thing to note in passing is that their claim not to act as “censors or moral guardians” is obviously not true. Acting as censors and moral guardians is exactly what they did about “lads’ mags” and a rather offensive Halloween costume. I did try asking them why they sometimes act as censors and moral guardians and sometimes don’t on their Facebook page. They initially replied simply to say that they had removed the Halloween costume from sale (which I already knew) and completely failed to answer my question, which does suggest that the people Tesco put in the position of interacting with the public are not exactly completely engaged in their role. When I pointed out that they hadn’t answered my question, they replied again to promise that they’d get back to me, but of course they never did. 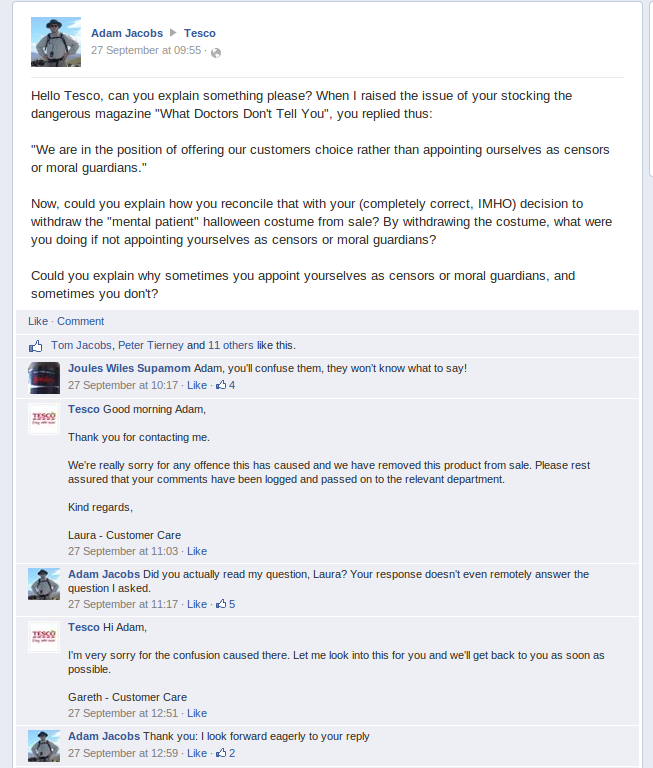 I also raised my concerns specifically about the magazine on Tesco’s Facebook page, but alas all I got was the same template response that others had got.

Well, I didn’t feel that there was much point pursuing this with Tesco’s customer service team as they were clearly only going to keep parroting the same answer. But I did notice that Tesco claim on their website to have a “Corporate Responsibility” team. So I thought I’d email them and point out the disconnect between selling WDDTY and their corporate responsibility principles, one of which is “Helping and encouraging our colleagues and customers to live healthier lives”. This is what I wrote:

I see that you have a clear policy about helping your customers to make healthy choices. That is admirable, but it seems that one of your purchasing decisions is really not living up to it.

I gather that you sell "What doctors don't tell you" in your magazine sections. This magazine is dangerous. It consists of much health misinformation (for example, advice to avoid life-saving vaccinations against diseases such as measles or whooping cough), and if any of your customers were unfortunate enough to believe the articles in it, then their health could be put seriously at risk.

There is a good reason why doctors don't tell you most of the stuff you read in that magazine, in much the same way that car mechanics don't tell you to care for your car's bodywork by regularly driving through salt water.

If you are not familiar with the magazine and would like to read more about just how dangerous it is, there is a useful list of resources here:

I urge you to reconsider your decision to sell the magazine, as it seems to be in clear breach of your CSR policy on helping your customers to live healthy lives.

As I'm sure you're all too aware, CSR policies are often regarded with some cynicism as mere window dressing, not backed up by any meaningful action. This is your chance to prove otherwise!

After a decent interval had elapsed, I asked them on their Facebook page when I might expect to get a response. No reply. So a little while later, I asked again. This time, they did reply. They said they couldn’t find my email, and could I forward it to their customer service department. I did so, making it very clear that it was not intended for their customer services department, but for their corporate responsibility department. This was the response I received:

I understand you have concerns over the magazine, What Doctors Don't Tell You, and I can appreciate your views on the matter.

Thank you for taking the time to contact us.

There followed much frustrating to-and-fro, both by email and on Facebook, while I asked them if I could have a reply from their corporate responsibility department. Mostly, they simply didn’t understand the question. Eventually, however, we seemed to make progress.

On Facebook, I was told that the corporate responsibility team would not reply to me directly, but would simply send the standard response from customer services that everyone else sent, because they like to ensure that their replies are consistent.

On the same day, I received the following email from someone else in their customer services department:

Thank you for your reply.

I would like to advise that in order for you to contact our Corporate responsibility team you would have to put it in writing to our Head Office in Cheshunt and the address is as follows.

Once again thank you for your reply.

So much for consistent replies.

Well, I did indeed do as Stephen suggested and I wrote an old-fashioned letter on a real piece of paper and put it in the post. That was getting on for 4 weeks ago, and I haven’t had a reply. I don’t honestly expect to get one.

Now, I dare say that Tesco’s corporate responsibility team have other things to worry about. Trying to make sure that not too many of the people who make their clothes in sweatshops in Bangladesh get killed in unsafe working conditions probably keeps them quite busy. They probably also need to spend a certain amount of time figuring out what kind of farm animals are in their ready meals and just how dishonestly to respond when they’re caught selling the wrong kind.

To my mind, this is absolutely a corporate responsibility issue. By selling WDDTY, Tesco are giving it a stamp of respectability. This is not about “free speech” or whether anyone is trying to “ban” WDDTY, despite some folks’ attempts to paint it that way (those arguments have been dealt with comprehensively by Matthew Lam and Andy Lewis). It’s about whether it’s responsible for retailers such as Tesco to give WDDTY an implicit stamp of approval. Anyone taken in by that false impression of credibility could be harmed, and I don’t think that’s a responsible way for Tesco to act.

I originally said that Sainsbury's had, to their credit, decided to stop selling the magazine after a trial period. It turns out they were lying when they said they were no longer going to sell it. They also continue to sell it.