What What Doctors Don't Tell You don't tell you

There's an alternative health magazine here in the UK called "What Doctors Don't Tell You" (actually, I think "alternative to health" might be a better description). It peddles all sorts of pseudoscientific nonsense, such as antivaccinationism and similar. When people are selling pseudoscientific nonsense, I think it's always interesting to wonder whether they genuinely believe the stuff they're selling, or whether they know that it's nonsense and are cynically seeing an opportunity to make money.

So I thought I'd do a little experiment.

WDDTY have a Facebook page. I recently asked on their Facebook page whether they were interested in hearing dissenting views about their articles. Their reply was an unequivocal yes. 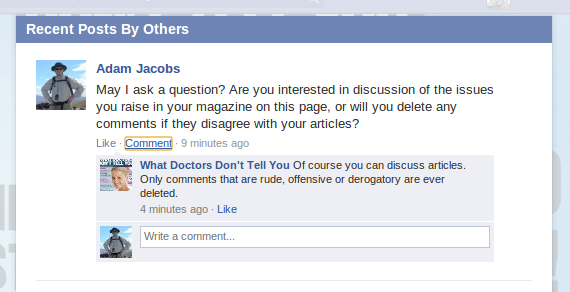 Well, that all sounds very well. Makes it sound like they are prepared to engage in reasoned discussion, doesn't it?

Unfortunately, the reality is rather different. Earlier today, I noticed they were making a claim that amiodarone increases cancer risk by 45%. Well, there has been a recent study that found an increased cancer risk with amiodarone, although it was 12%, not 45%, and it was also not statistically significant. Now, amiodarone is a drug that's had its fair share of safety problems, and it may well be true that it raises cancer risk to a small extent, but over-stating the risks by pretending they're nearly 4 times higher than they really are is not, in my opinion, something that's going to help patients. So I posted a comment on their story. 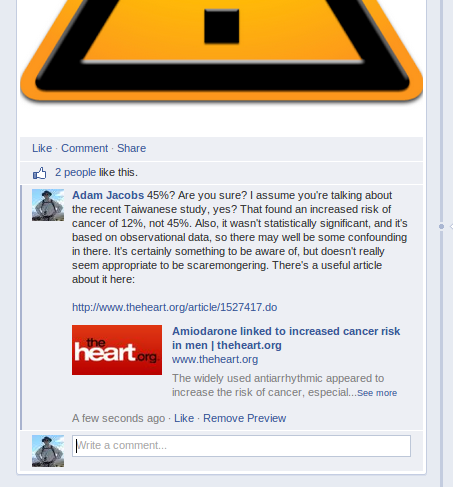 That comment has now been deleted, and I have been banned from WDDTY's Facebook page. I don't think my comment was rude, offensive, or derogatory. All it did was point out that their article was wrong.

WDDTY have shown that they are not prepared to engage with dissenting points of view. They would rather pretend those points of view don't exist. In any discussion of medical issues, suppressing dissenting opinions is pretty much pathognomonic of quackery. It won't surprise you to know that this is exactly how homeopaths and Stanislaw Burzynski's PR operation behave as well.

← Ghostwriting myths A challenge to the Society of Homeopaths →