Posted on 06 Mar 2013 and filed under Pseudoscience 2 Comments

Opposition to vaccines is nothing new. In fact, it's as old as vaccination itself. I have always found it puzzling how anyone could oppose vaccines, given that they have made a truly miraculous contribution to public health. The eradication of the killer disease smallpox by vaccination is, in my humble opinion, a serious contender for the greatest ever achievement of medical science. And, of course, many other previously common killer diseases are now extremely rare, thanks to vaccines, as this handy little infographic shows: 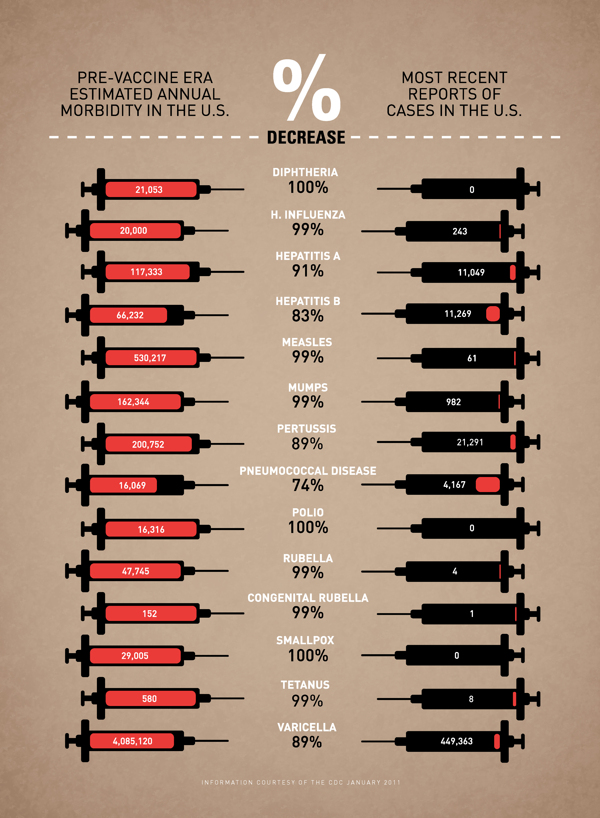 But nonetheless, the fact remains that there are those who are opposed to vaccines, sometimes vehemently so. One example is the Australian Vaccination Network. I'm writing about them today because, although they are well known to our Antipodean friends, I suspect they may not be quite so well known here in the UK.

The AVN would probably deny being "anti-vaccine", of course. For some reason, anti-vaccinationists almost always do. That's something else I find puzzling: if you are opposed to vaccination, why not just say so? It's almost as if you knew you were taking a completely intellectually unjustifiable and morally bankrupt position.

It's easy to see how thoroughly dishonest the AVN are if you compare what they say about themselves with what they actually do. Their website states

And yet it's pretty easy to see that they don't believe any such thing. I discovered this for myself the other day when I had a look at their Facebook page. Someone on that page was asking about hepatitis B vaccination. I thought it might be useful to provide some, so I linked to information from the WHO. Another contributor to the thread made the claim that hepatitis B vaccination has actually increased rates of liver cancer, which of course is untrue, so I linked to a study showing how hepatitis B vaccination has actually been very successful in decreasing liver cancer incidence. You can see my posts in this screenshot:

Well, apparently providing information about vaccines was unacceptable to AVN. My contributions to the thread were deleted. Now, does that seem like the action of someone who believes that "everyone has the right to access all available data on vaccinations"? It seems more like the action of someone who is more keen to hide information about vaccines, and replace it with dangerous propaganda. Apparently my posting information was "antagonistic" and "won't be tolerated".

But does any of this matter? Well, yes, I believe it does. Some kinds of conspiracy theories are harmless enough. If people want to believe that NASA faked the moon landings, then we may laugh at them, but it doesn't really do any harm. If people believe in vaccine conspiracy theories, then they may put their children's lives at risk. They may also put other people's children's lives at risk, if their own children carry vaccine-preventable diseases which then infect others.

So, for example, when the AVN go around telling people that they shouldn't be vaccinated against pertussis, and when people in Australia die from pertussis, you can't help but wonder whether lives might have been saved in the absence of such a vocal anti-vaccination lobby.

Of course, we have anti-vaccinationists in the UK as well. JABS is probably the best known. Now I could be wrong about this, but I get the feeling that few people in the UK take JABS seriously: they are generally seen as a fringe movement of cranks. Their website looks like something that's been cooked up by a bunch of crazy conspiracy theorists.

But AVN looks like a more professional set-up, and that should be a cause for concern. Happily, it looks like the Australian legal system may be about to force them to change their name to something a little more honest. But I think we should not be complacent here. It's important to recognise organisations like AVN for what they are. They are not simply "providers of information". Make no mistake: groups like the AVN are a dangerous threat to public health.